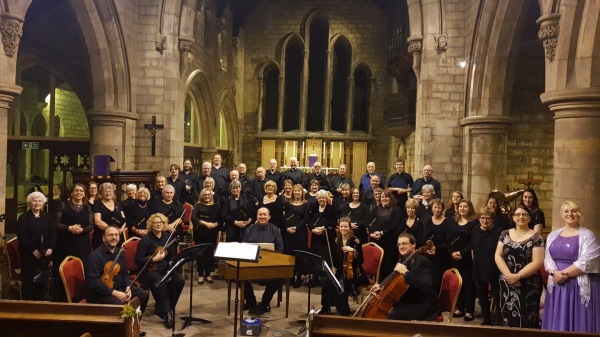 Thank you to our regular choir members and all our guests for a super concert this evening.
Great comments from the audience, and the string players, who once again really enjoyed playing with such a great choir. Their compliments are those of experienced players, who encounter all sorts, so congratulations to all.
Particular thanks to our vocal soloists Clare Wheat and Ruth Milsom, and our string players, David Milsom, Charlotte Kenyon, Rebecca Smith and Tom Collingwood, and of course to our own great accompanist, Jonathan Gooing.
See you all for the Christmas concert.
Robert

Vivaldi: Gloria; Rutter: I will sing with the Spirit, Feel the Spirit, For the Beauty of the Earth
As a player for this concert, I can offer something of an ‘inside track’ in respect of a committed and lively performance of Vivaldi’s evergreen Gloria, RV80, cast with success and enterprise as a ‘bring and sing’ exercise in which the regular choir members were joined by visitors. Aided by well-shaped alto and soprano solo numbers by Clare Wheat and Ruth Milsom, this was an energetic and committed rendition in the pleasing surroundings of St Margaret’s Church, Swinton: a venue aptly suited to this evening’s concert.
The second half included works by John Rutter. Rutter’s music gets a somewhat mixed reception these days – beloved of amateur choirs, but often derided by professionals. This is not, however, a very fair judgement, and the juxtaposition of these works with the Vivaldi in the first half was very fitting. For, just as Vivaldi’s music evidences an easy melodic grace and a sense (for its harmonic and formal simplicity) of being rather more than the ‘sum of its parts’ (reason perhaps for its continued popularity), so too Rutter’s music. As an audience member rather than participant (notwithstanding a brief moment of invited ‘participation’ in ‘When the saints go marching in’ in Feel the Spirit!) it was good to hear Rutter’s sense of fun and invention, the spiritual settings displaying lively aplomb and dark contemplation in equal measure. In the second half, we had ample opportunity to hear Jonathan Gooing’s gloriously colourful accompaniment, making the most of a somewhat superannuated piano, and Clare Wheat’s lovely dark tones in the contralto solo numbers.
So many amateur choirs evidence a sense of earnestness, and yet lack of fun and vivaciousness – untrained voices brought together can result all too often in dubious intonation, a lack of differentiation between styles and contexts, and mumbled diction. Not so Bel Canto tonight – words were clearly heard, and there was a real sense of musical shaping and enjoyment, aided by the energetic and committed direction of Robert Webb, who really did get the best out of his singers, whether as regular members of this excellent choir, or its various visitors.
I always enjoying coming and playing for this choir, and I am sure that the audience, depleted somewhat by the inclement weather and the flooding problems experienced recently, felt that this was an occasion well worth coming out for.